So we got up at this morning at low tide, well maybe an hour after low tide since it's Sunday and low tide was at about 8am, and went down to look at the ship wreck again and look who we found! 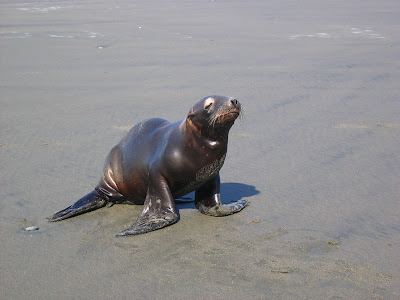 This little guy was about 100 yards from the ship wreck. At first we thought it was a small dog that some people were taking pictures of. We were walking that way any way and as we got closer It seemed like maybe it wasn't a dog after all. It's cool to be able to walk across the street to see part of a 130 year old ship wreck and find cute little sea lion pups hanging out. We called the Marine Mammal center to report it and they said they would send someone to check it out.

Here s/he is in 3D! I asked if s/he could hold still for my 3d picture but I guess s/he doesn't understand my east coast accent and moved a little so you may notice the head looking a little funny in 3d. 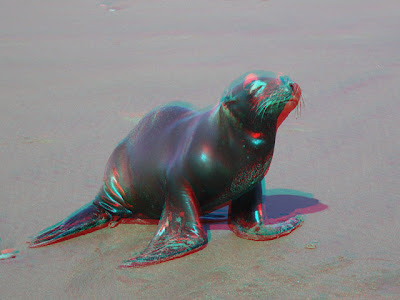 awww. that looks like one that poked it's head out at me when u tried to take me surfing at that first place...where it was all rough and scary.

I wish the dolphins would stay still like that.