After having my 8" telescope stolen about 4 years ago and finally replacing it several months back over the Holidays I had first light with the new telescope and all went okay. We took a road trip to the Grand Canyon stopping in Joshua Tree on the way there and back for some Holiday dark skies. Well at least dark compared to SF -:] 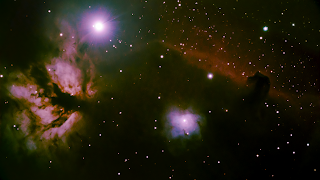 My first real target (M42 is always my goto test) was the Horse Head Nebula which I have been trying to get a better shot of for years. This is actually combine images from two nights but half of the time was from first light night. 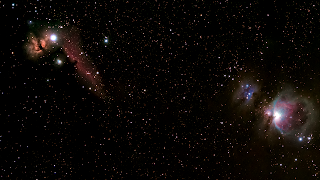 I also setup my very portable Red Cat rig for a wide field shot of M42 and the Horse Head together. I am super excited about the results I get with my Red Cat on a Move Shoot Move star tracker. The whole setup easily fits in a small backpack with a little room to spare. For sure my travel setup going forward. 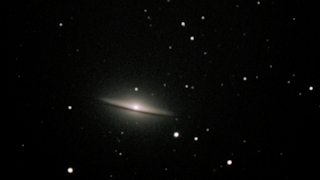 On the first night before breaking down the scope I thought I would try getting some images of the Sombrero Nebula. Probably the best image of the Sombrero I have taken yet even though I only spent a little time imaging it. 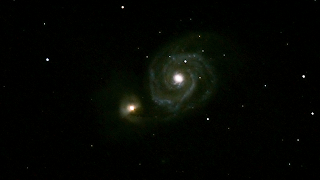 And on the 2nd night in Joshua Tree again before breaking down I turn the scope to M51 for a little bit. Again I think this is probably my best image of M101 yet mostly due to the dark skies in Joshua Tree.

Now I just need to make more time to get back out under some clear skies!
Posted by jimmy at 6:21 PM No comments:

wang stuck in our gate 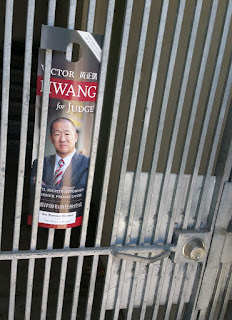 Came home to find a wang stuck in our front gate.
Posted by jimmy at 1:01 PM No comments:

When we left our apartment to go get lunch it smelled like dead fish. It was trash day so the first thought was maybe just an open trash can. Walked out and didn't see any open. Then started walking down the block and the smell didn't get any better. When we hit the cross street and the sea breeze hit us fully it got even worse. In our hood that usually means there's something dead on the beach so we went down to see what was up. And it was a mass stranding of "By the Wind Sailor" jellyfish! Well they aren't really jellyfish and have some scientific name I think you can find on this blog somewhere. They are one of our favorite things that washes up on our beach. 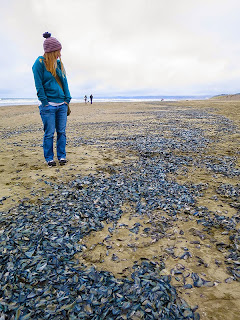 Just look at them all! Lucky for Linda she wore a matching outfit -:] 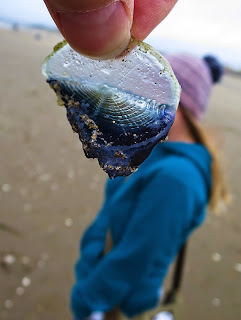 This one is disolving Linda's face away -:\ 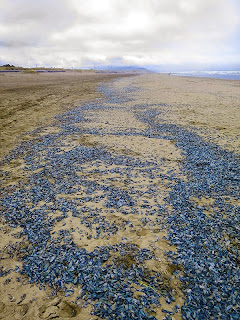 So many dead By the Wind Sailors. There were miles of them and they smelled like dead fish. We were walking by the water most of they way and the wind was on shore (hence the mass stranding) and it didn't smell at all. 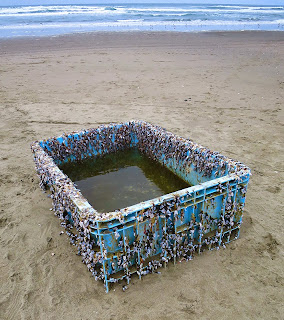 It seems the wind also washed up a giant tub covered in sea things. Maybe they are clams or mussels of some kind? 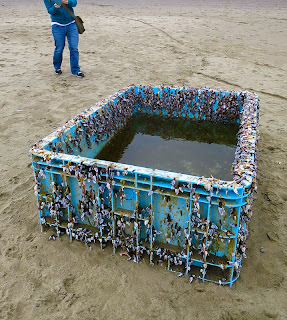 The tub was pretty big, probably 5'x8' and 2-3' deep. Probably a fish tub that fell off a fishing boat. Was thinking of dragging it home and cleaning it off and using it for something but decided that would be way to much work. 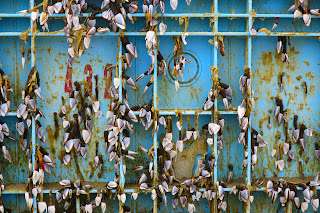 I really liked the way the side looked all blue and covered in sea stuff. 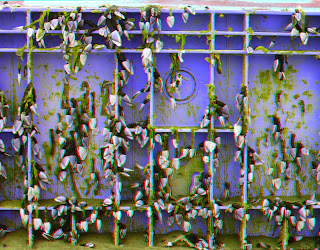 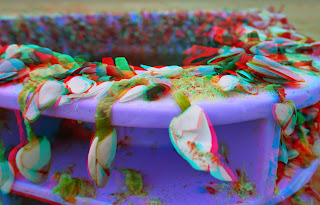 And a close up of the sea stuff on the tub.
Posted by jimmy at 11:56 PM No comments: 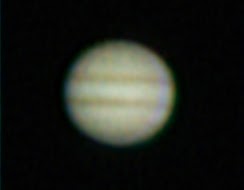 Took an unplanned quick picture(s as in a stack of 20) of Jupiter from the kitchen. Totally unplanned and with my small telescope, no tracking (just a tripod) looking across a slightly hazy sky through a slightly dirty window. I can't complain.
Posted by jimmy at 7:04 PM No comments:

Sun is wishing everyone a happy Halloween -:] 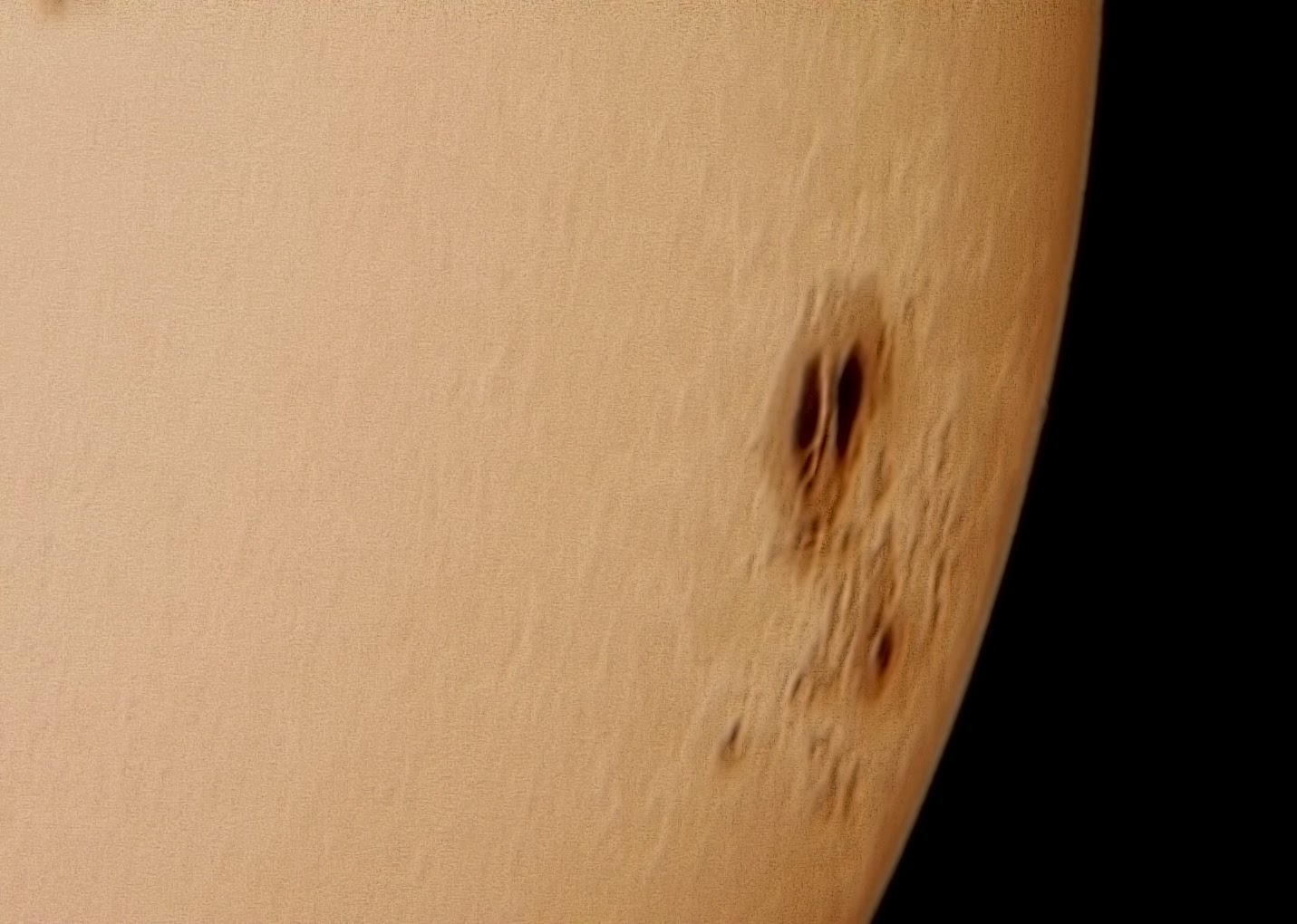 Sun spot AR2192 is about to go away but is looking a bit like a skull right? Trying eye-piece projection with my little 81mm refactor scope. Worked out okay. Hope to try again in a few weeks when it comes back around or if there are any new semi big or interesting sunspots now that I have my solar filters.

P.S. Here are some maybe halloweeny sounds to listen to while viewing the astrophotography https://soundcloud.com/t1t4/sets/astrophoto-sound-track

Found a Pinwheel and a Horsehead

Went camping at Pinnicals National Park and was finally able to get my new little telescope out under pretty dark skies. Mixed luck but super fun! 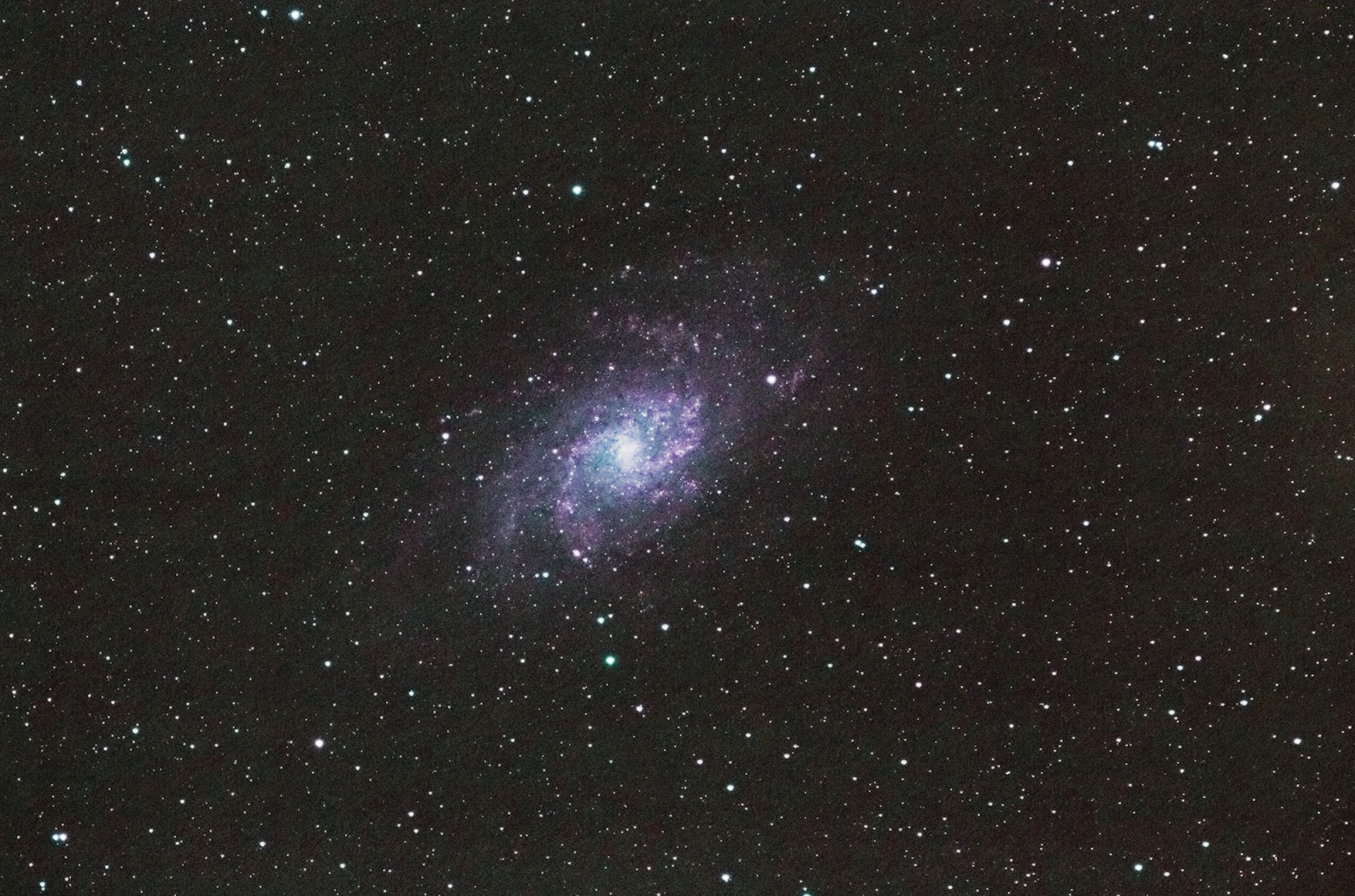 First time imaging the Triangulum Galaxy (aka m33). Only about 7min of exposure but still got something. Need to get a couple of hours of this one at some point. 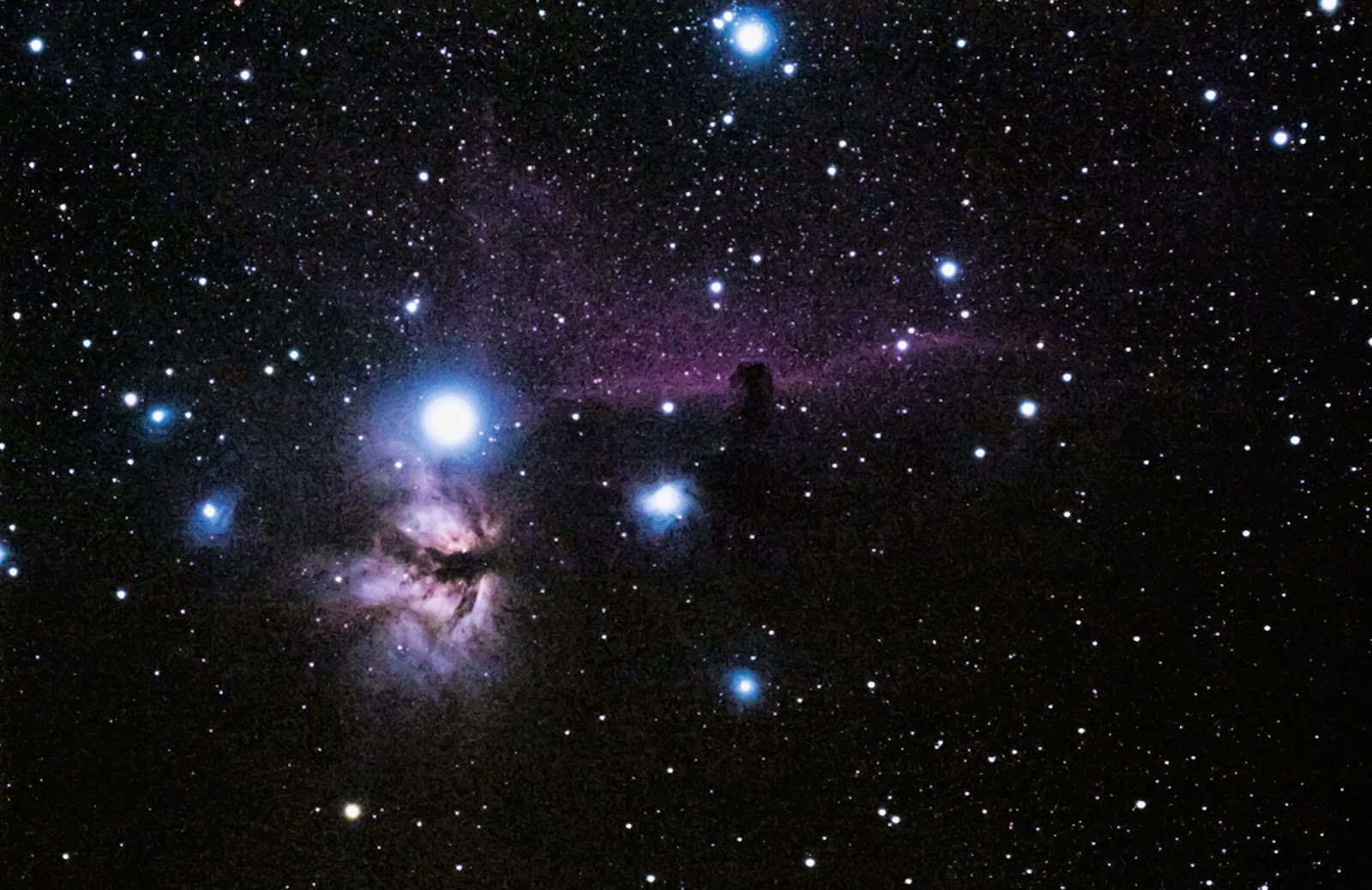 Finally managed to get an okay image of the Horsehead Nebula! I think I've been trying to image this for a few years now and finally got something okay. The new scope is a lot smaller than my other one and is a fair amount faster (3"@F6.6 vs 8"@F10) with a wider view. Also you can see the Flame Nebula (aka NGC 2024). 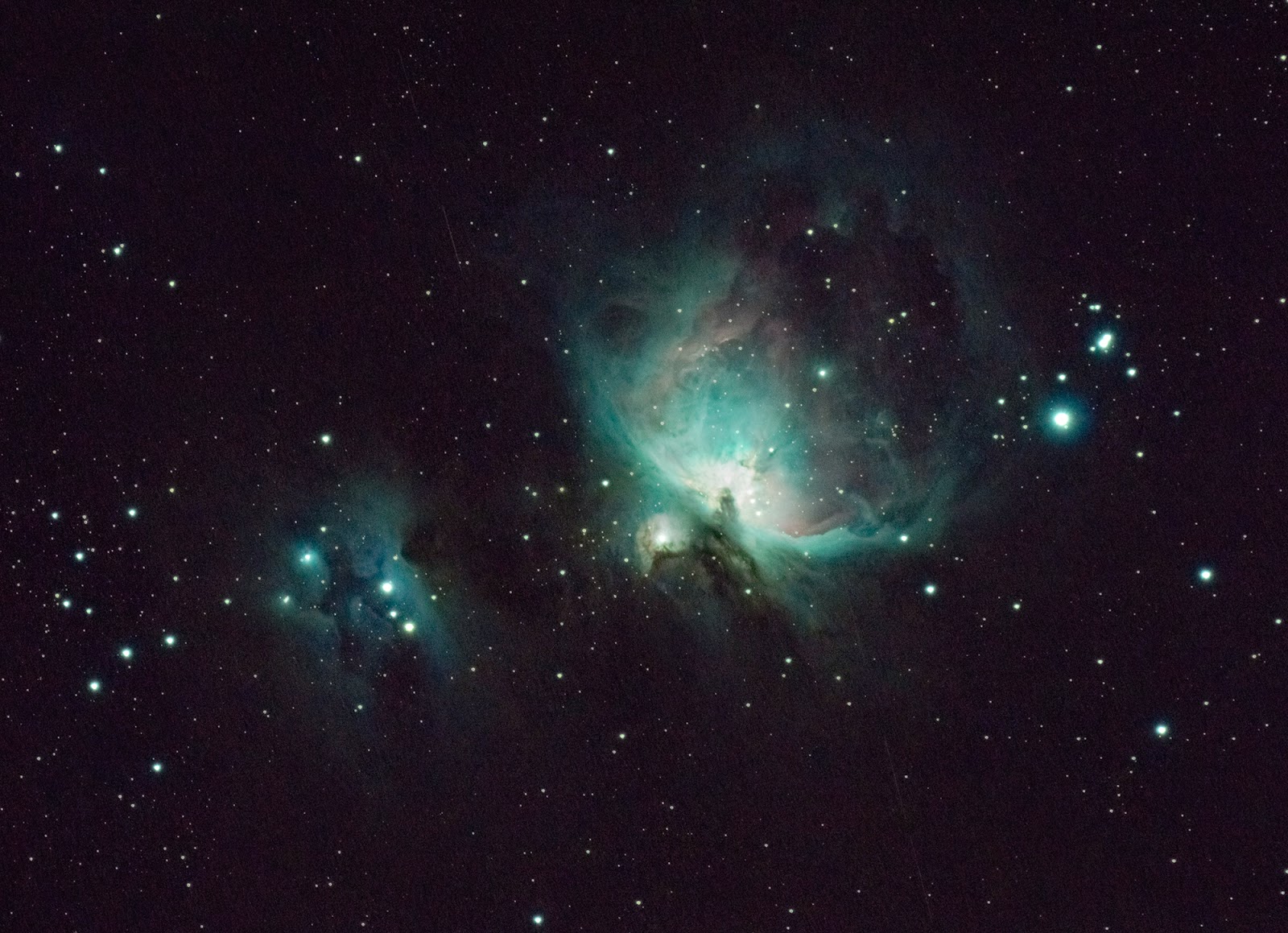 And how could I resist giving trying out the Orion Nebula (aka m42)? I couldn't. Much wider view without the need for a reducer which let me fit the Running Man Nebula (aka NGC 1977) in as well.

Now to practice my alignment with the new mount which took me the better part of an hour or more to setup this time. I want to spend more time imaging and less time fiddling with the telescope to to get it up and running next time. I might have had better images, more images or time to take some pictures of the meteor shower if I had been able to get up and running faster. Next time but so far so good!

Bit of a solar eclipse

There was a partial eclipse today and I managed to get a few images. 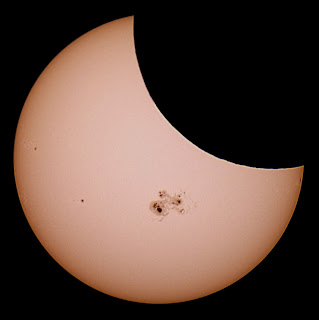 I think this is slightly sharper than the next image. 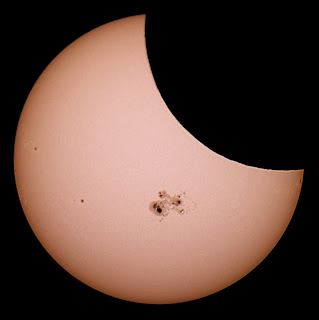 But this one still turned out okay. You can click on the images to see a larger version. 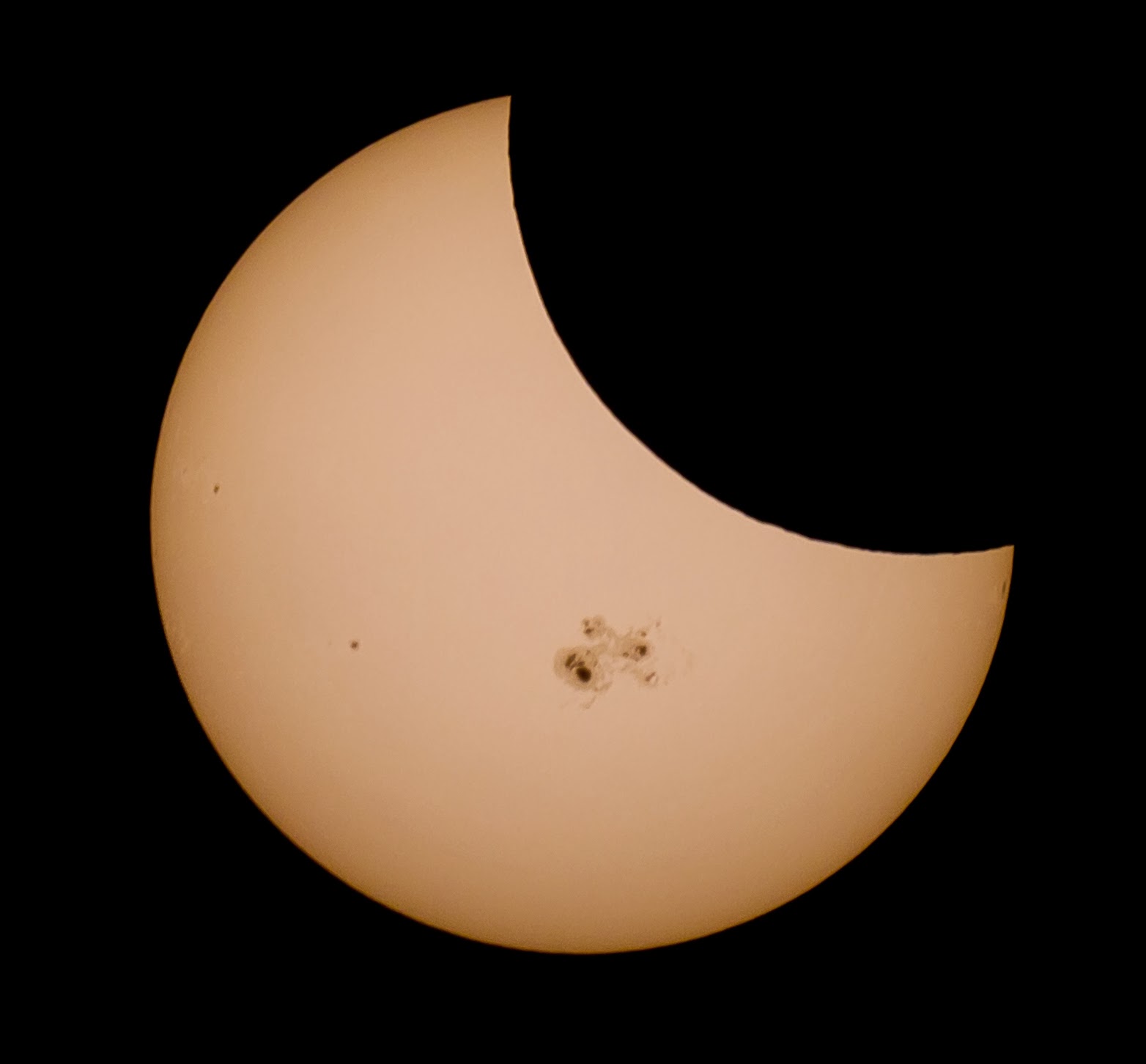 And one more. Less processing and maybe a little cleaner?
Posted by jimmy at 12:00 AM No comments: