A 3D ship wreck and some numbers

So on our walk today we came across some stuff at the edge of the surf we have see a few times in the past few weeks but until now the tide was to high to get a close look at it. Today we could get right up to it. Mostly before we just saw the pole and something biggish under the shore break. We called it a sub because of the periscope. Today we figured we would see a sub. Nope. I took a look and decided it was a ship wreck. Yeah, right, probably just some old part of a pier or something. I took this 3d picture (it's hard to tell but take a look with some red/blue glasses). Then went home and looked up Ocean Beach ship wreck. Wow, it was a ship wreck! From 1878 no less! It was called the King Philip and was a three masted clipper ship. Clipper ships were apparently about as fast as ships got back in the day and were used for hauling valuable cargo. Cool! But what kind of cargo did this Ferrari of the high seas carry you ask? The best cargo of all, Bird Poop! Hell yeah! Any way you can read more and see videos about the wreck at these links:
An SF Gate article
A good picture from the last time it was uncovered in the 80s
A local news report about it (you have to watch an ad first)

We also spotted this tiny abacus which was most likely before today last used to calculate the strength of the King Philip's anchor line... 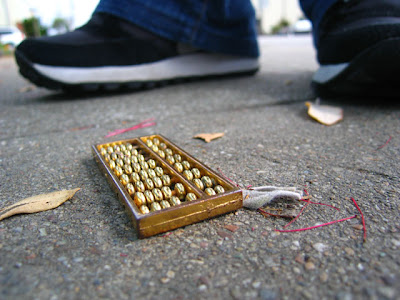 ...and today to calculate the advanced 3d formulas needed to make the great 3d image below. 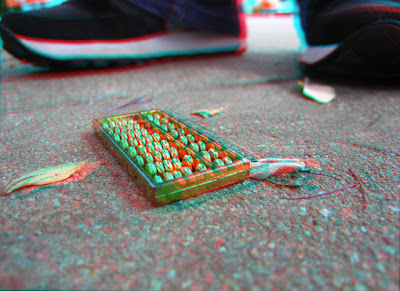 I'm not totally up on my abacus skills so I'm not sure if it is set to zero or to our national deficit.
Posted by jimmy at 5:13 PM