That sand's not dirty... 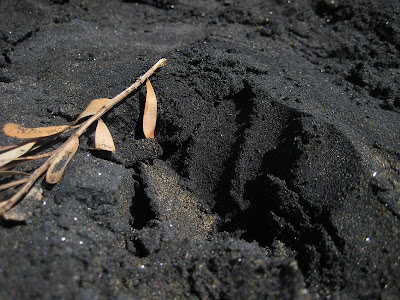 ...it's full of GOLD! For a long time we wondered what was the cause of all the black sand on our beach. The first thought is always pollution. SF is a decent sized city so it would not be surprising if it was some kind of industrial waste. But having spent lots of time in the Outer Banks of North Carolina where there is naturally occurring tar which make some of the sand black I was not convinced it was pollution. Only thing is they don't call people from SF or Ocean Beach "Tar heals" so I figure it isn't tar. So what is it? Apparently knowing that SF is all about the gold rush of '49 the sand went and got some gold in it! Yep all that black sand has gold in it. Though it turns out not very much which makes it mostly not worth the effort to extract it. But that didn't stop some guy in the 80s from trying to haul some off. To bad for him it's a state park and they weren't down with his plan. Any way it's nice knowing all that black sand we drag in our apartment has a little gold in it -:]
Posted by jimmy at 11:24 PM