So someone went and crashed a cargo ship into the bay bridge and dumped a bunch of fuel into the bay that ended up all over the beaches here in SF. The fuel oil has caused all kinds of problems for the wild life, fisher persons and surfers (a.k.a. Me!). The local beach and water was closed for a few weeks and some of the other surf spots were closed for a few days. Our beach was just opened to walk on last week so we went down to check it out. A park ranger guy was cleaning up the oil and showed us what it looked like and where it was most likely to be so we could avoid it. I have to say as bad as this stuff is for the environment the small blobs we saw were kind of pretty. They were mostly about the size of a dime or smaller. Here is what one looked like up close and in 3D. 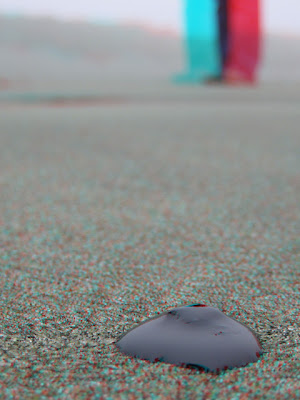 Another picture. The actual kind of fuel also had sort of an ominous and at the same time interesting name, bunker fuel. 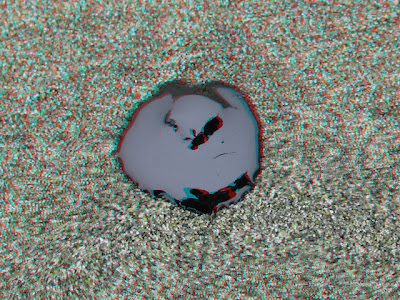 It's pretty but don't touch, it's supposed to be really bad stuff.
Posted by jimmy at 2:30 PM

Surfing in oil would be zero fun. I thought there would be big slicks of oil up and down the beach. I wonder how many of those drops were cleaned up? How was the ranger cleaning up the oil? -t

The ranger was using a spoon to scoop the oil blobs off the beach, which he put into a small plastic container with a lid (like the kind that hummus comes in). He was wearing gloves, but no other protection. It was a very casual clean-up effort.

A few days earlier the beach had been full of people in white head-to-toe hazmat suits, and there were big bags of stuff (oily junk, I guess) at the beach entrances, to be picked up and disposed of. That was kind of scary to see.