So at about 6:15 this morning Linda and I are woken up bya strange sound from outside the bedroom door. It was kind of a flapping/flopping sound. Of course we are both a little worried it might be some animal flopping around outside our door. Then I bring up that maybe it is Butter (Linda's 16 pound cat) but we quickly decide it doesn't really sound like him. So I decide to get up and see if I can see anything if I open the door a little. I peek out and with the bedroom light on all I can see is Butter sitting in the hall with a concerned look on his face. He kind of looks at me then back behind him then back at me as if to say "Aren't you going to go see what's making that creepy noise in the dark?"I decided if he's disturbed by it I'm more disturbed by it. So I close the door, put on some clothes and some thick socks since I don't have shoes in the bedroom, and go to investigate. I left the bedroom door open so I could see a little in the hall since the light for the hall is at the other end, which, with the noise, seems extra dark and far away. Linda didn't really like my plan and said I had to shut the door in case it was a mouse or rat so it couldn't run in and cuddle up in bed with her. So I step into the bathroom and flick on the light which is only 1/3 as far away as the hall light and shut the bedroom door. I quickly find some shoes and slip them on in case I need to stomp a rat or something plus shoes just make your feet feel safer in situations like this.

I just kind of stand there for a little bit trying to figure out where the noise is coming from. It was kind of sporadic like the noise an animal might make when trapped in a small space. After a few seconds I realize the sound is coming from the bathroom. Okay, the light is on already so I stand looking in. All I see is the bathroom curtain moving around in front of the bathroom vent. So I think maybe it's just the curtain hitting the tub. But as I watch, the motion and the sound just don't match up. I figure it sounds small and not 100% animal so I step in and pull the curtain back and see nothing. Hum. Then I realize the sound is coming from the vent. Cool! Since if it's an animal the vent will protect me! I'm so brave aren't I -;] Here is where the noise was coming from. 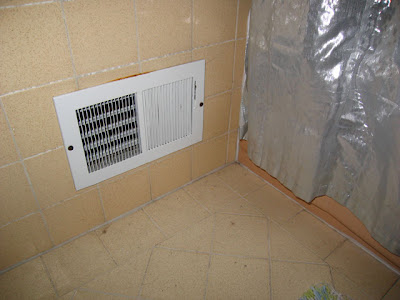 I can't really see anything in the vent because it's all dark in
there so I go find our big flashlight and shine it in there and
see this big white thing moving around. At first I think maybe
it's a trapped bird but can't tell so I put my face right up in there
and realize it's only a stupid piece of paper! Now I feel kind of stupid
for wanting to put clothes and shoes on and being so cautious. Maybe
if Butter hadn't acted a little nervous I wouldn't have been as
worried that it was a strange animal. Any way I got a screwdriver,
opened up the vent and took the paper out. Check it out below. 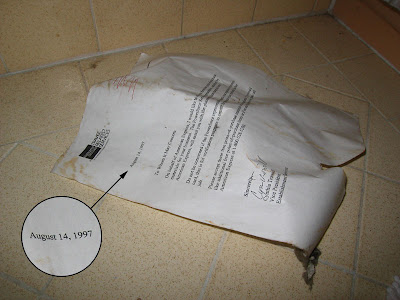 It is some kind of American Express form letter from August
14, 1997. Wow, has it been in our vent for 10 years?! Neat.
The front had dirt and some red scribbling on it like someone
was trying to get a ballpoint pen working. The back is a little
more interesting because it has some kind of list that I can't
make heads or tails of. Any ideas? 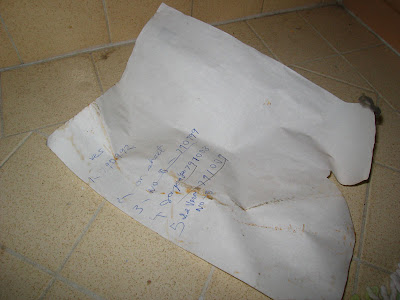 Linda is yelling at me now to get ready for work so I have to go
get ready so we're not late. Let me know what you think
the list is, 'cause I have no idea.
Posted by jimmy at 7:17 AM

Ha ha, my men were "on the job" this morning!
I think Butter would have helped out more if it had been a mouse or a giant bug in the vent. People stuff freaks him out!

wow, i had a similiar experience to that one time...umm...but hallucanagenic drugs may have been involved...yeah...i'm not sure...nobody believed me anyways...maybe it was just a piece of paper, as well?

Ok so the story had me engrossed... What is? what could it be? But now I'm dissapointed becuase I can't see the pics. :( Does anyone else see them?

Where did my pictures go?! They were there all day yesterday now they are gone -:[ If they're not back tonight I'll try re-uploading them.

Even though our vent has been paper-free for a while now, the cat still stares into the little grate just about every morning. . . I wonder what he sees in there?